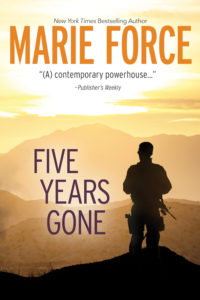 It’s been a long time since I picked up a military romance so when I saw the cover for Five Years Gone I was excited to dive right in!
This is not your mother’s military romance. It’s a love triangle with a twist! There’s angst, suspense, humor and a soul-touching love story in Five Years Gone. I loved it so much I had to ask New York Times and USA Today Best Selling Author Marie Force for an interview. Not only did she agree right away, she replied with her answers the very next morning. (Fan girl, down!)

Jeannine Colette: In Five Years Gone, Ava is torn between two lovers, but this isn’t your typical love triangle. Her boyfriend, John, has been gone for five years — never to be heard from after leaving for war — when she meets Eric at a wedding. How is the memory of her days with John, and the hope of his possible return, enough to keep Ava in romantic limbo?

MARIE FORCE: The love Ava shared with John was one of those once-in-a-lifetime things we read about in romance novels and see in movies. It was the real deal, and as such, it was almost impossible for her to walk away from it even years after he deployed. When she meets Eric, theirs is a fun friendship at first because Ava still can’t imagine being with anyone but John. But over time, Eric becomes much more to her, forcing her to confront her unresolved feelings for John. Ava’s conflict was fun to write.

JC: After five years without contact, Ava decides it’s time to move on. How long would you have waited?

MF: One of the things I love about writing fiction is the ability to put myself in the place of the characters. I don’t think I would’ve waited as long as she did, but everyone has to make those decisions for themselves. I would’ve been a lot more angry at him than she was, but she came at it from a place of love and loyalty and devotion, which was admirable to me. She kept that candle burning for him for a very long time when he had given her absolutely no reason to do so. I admired her strength and fortitude and her courage when it came time to start over.

JC: There is a beautiful message of life after loss…any kind of loss. How does that message help drive Ava and Eric’s love story?

MF: Ava and Eric have both been through a LOT before they meet, and I think that common experience helped them to bond first as friends and later as romantic partners. While their past experiences were very different, there was a commonality to it that gave them a place to begin building their relationship.

JC: Ava and Eric’s romance is a well-paced build-up with a very rewarding climax. Do you plot out your stories or do you let the characters dictate what happens next?

MF: I never plot anything in advance. I am a seat-of-the-pants girl all the way with my character driving the narrative. However, I definitely was going for a slower burn with these characters, and I am glad you found the climax satisfying.

JC: The life events in the novel are fictional but hit close to home with their similarities to 9/11 and the arrest of Osama Bin Laden. How did these events inspire this story and you as a writer?

MF: Yes, there were similarities to those events, but I purposely decided to fictionalize mine because I wanted there to be no emotional attachment to the events portrayed in the book that would take away from Ava’s story or her journey. I will confess to be fascinated by the idea that a SEAL team could bring down the world’s most wanted man and remain entirely anonymous in this day and age. So having the terrorists “out” the SEALS in the book really added something new and different to the plot for this book and the sequel.

JC: Have you been personally affected by these events?

MF: Like everyone, I was deeply affected by 9/11. On that day, I was in Jacksonville, FL, with two young kids, and my husband, who was in the navy, was deploying to Puerto Rico for training onboard the USS John F. Kennedy aircraft carrier. On the CNN trailer, I learned that his ship was being sent to NYC. Later, he told me was the one who received the message from the Pentagon, directing the Kennedy to the NYC area to “protect the US motherland.” Those words still give me chills all these years later. In twenty years in Navy communications, he had never seen a message quite like that one.

JC: Ava and Eric’s families play significant roles in this story driving the humor and angst with each scene. Who was your favorite to write?

MF: I loved them both for different reasons, but Ava was truly the heart and soul of this book and more of the scenes were written from her point of view. So if I had to choose one of them, I would pick her, but I truly loved what Eric and his siblings brought to this book, too.

JC:There is a follow-up book but I won’t give away any spoilers!!! Did you know there would be a spin-off when you started writing Five Years Gone? When will it release?

MF: No, I didn’t know there would be a follow-up, but I’d like to think I’ve learned a few things in ten years as a published author. I know my readers would freak out about what happens to character X, so I did a preemptive strike by including a first chapter of the sequel in the back of Five Years Gone so they’d know it was coming. I am aiming for summer 2019 at the latest for the sequel. I’m glad you’re looking forward to it!