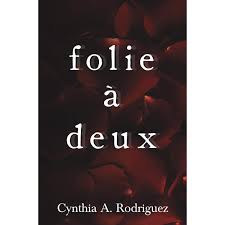 Whenever I want a read that takes me out away from super-sweet, I dive into a novel by Cynthia A. Rodriguez. Her latest novel, Folie A Deux did not disappoint! It’s a mind f*ck of a romance; Girl, Interrupted meets Romeo and Juliet. Rose and Abel are wards of a psychiatric facility who find a connection when everyone says they should stay away from one another. I ran away with these characters and was with them as they fell hard, made bad decisions, and *almost* threw my kindle against the wall at that ending!

Here is your SPOTLIGHT with Cynthia A. Rodriguez on Folie A Deux!

Jeannine Colette: This is a maddening romance that can only come from a maddening place. Where did you get the inspiration for this love story?

Cynthia A. Rodriguez: I actually started this story years ago, when I was going through separating from my husband. I hadn’t realized just how angry I was over the disintegration of my marriage, but I was. And when I started writing it, it was becoming this sort of monster of a story. It was getting too angry and far from what felt was right. So I shelved it. After releasing EVOL, I felt confident enough to come back to this story. It’d been haunting me, specifically the ending, since I set it aside. When I opened up the story this time, a character I thought was merely secondary ended up having a louder voice this time around. And it became his story. I was as angry as Rose before, and now I am more like Abel.

Jeannine Colette: Abel and Rose meet in the psych ward where they’re immediately drawn to each other. He is quickly warned to stay away from the “dangerous” Rose. Why can’t he head the warnings?

CR: She’s beautiful! And she looks so innocent. I think it all plays on the way people dismiss her as a lost cause. He’s felt that from society as a homeless person. Even from his own father. It starts with her beauty and his curiosity, but he wants to save her. To help her feel worthy so it boosts his own worth.

JC: The two find comfort in each other in a place where you are solitarily confined. How does their environment help bring them together and part, both inside and outside of the hospital?

CR: It’s funny because I think in the institution, they are almost forced together. Their surroundings force them to fall in love quicker than what the average person would because it feels so do-or-die to them. The whirlwind of it all is something they both just succumb to because it feels so great to feel important and accepted by someone else. Neither of them has experienced something this deep before. But once they’re given space outside the mental institution, the doubts begin to take shape and it creates a wedge that both are content to almost ignore. Abel has a harder time ignoring this, but he’s so loyal, he’ll ignore every voice in his head (lol) and every gut feeling just to keep from giving up on her. Rose feels every impact her actions have on him, but once she sees how willing he is to continue, she kind of pulls him to the dark side with her. Almost like a child poking and your boundaries to see what they can get away with. But she takes it further and I love that. She welcomes him to her hell.

JC: This story takes you down the rabbit hole and as a reader you’re eager to follow! How does Able continue to justify Rose’s actions page after page?

CR: Love. Man, love can make you justify almost anything. And she also, unknowingly, hits him right in his own insecurities. She’s this immaculate young woman who’d been given all of the best circumstances and a near pristine upbringing, whereas he’d lived this violent and sad life with no real future. All Abel really wants is to feel like someone out there will genuinely love and stick with him. Who better than Rose? It starts from an honest place of wanting to save her and give her a chance at life and ends up becoming this situation where now he’s not only enabling, he’s aiding in her terrible behavior. There’s a scene after they escape when he realizes what he’s done and he just has to accept the responsibility of it: “I loved her selfishly instead. I didn’t do right by her and now people will suffer. Including me. But fuck it. I deserve it.”

JC: Do you believe in souls mates?

CR: This answer has changed over time. Initially, I would say yes and without question.Now I believe we have multiple soul mates for multiple purposes and lessons in our lives. I have friends who are soul mates. Old relationships that were likely soul mates in that moment.If there is a lesson, there is a degree of “meant to be” there.

JC: There’s a strong undercurrent of family in this novel. How do their upbringings help create who Able and Rose are?

CR: Both of their mothers are sadistic and evil. While Rose’s father was considered innocent by many, he wasn’t completely. They had their vices. For Rose’s family, it was money and power. For Abel’s mother, it was alcohol. For his father, it was purity and idealism. Because Rose was unchecked, her violent actions merely swept under the rug, she grew under this notion that as long as she hid the monster (was Dr. Jekyll instead of Mr. Hyde), it was okay. And when her mother exploited her for her violence, there became enough anger to completely kill this way of thinking and force the monster to the forefront. And sweet Abel just wants the love he’d been denied his whole life. He wants to be someone’s priority and to be seen.

JC: What does Folie a deux mean?

CR: Folie a deux is defined as a shared psychosis (delusion or mental illness shared by two people in close association).In terms of this story, one could think it’s about Abel and Rose in the sense that he becomes as violent as she does. But that isn’t the case in my eyes, because he never quite gets the taste for blood that she does. In the end, that’s where the shared madness begins. Right at the end.