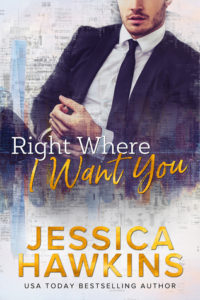 Right Where I Want You is a book I’ve been waiting for and it did not disappoint!! Holy smoldering office romance!

Set in NYC, Right Where I Want You follows Georgina — a good girl who just went through a confidence-shattering breakup— takes a new job at Modern Man magazine, a place known for being run by “bad boys.” Her new partner is the illustrious playboy Sebastian Quinn, and while these two have chemistry that is off-the-charts, they are enemies who refuse to put pleasure before pride.

Right Where I Want You is an enemies-to-lovers romance with emotionally-charged characters, angst, sexiness and it’s funny as all hell! I’m excited to have USA Today Best Selling Author Jessica Hawkins answer a few questions about this highly anticipated romance!

Here is this month’s SPOTLIGHT!!!

Jeannine Colette: Georgina is “a fixer” who lives a double life. In the office she’s George, the confidant, direct woman who commands respect. In her personal life she struggles with balancing her generosity with being taken for granted. How does her life as George and Georgina play into this heroine’s vulnerability when it comes to the swoon-worthy hero Sebastian?

JESSICA HAWKINS: I think it never occurs to someone like Sebastian that Georgina might struggle with insecurities or question her capabilities because she comes into the workplace full steam ahead. He thinks she thinks she has it all figured out—and he also thinks she’s full of it. So it’s not until he realizes she has a wall up that he sees Georgina can be vulnerable, and that she counts it as a flaw. It’s great that they can not only recognize that in each other but celebrate it.

JC: I love a good bad boy and you nailed it with Sebastian! He’s all hard edges, but you learn early on he has a soft side waiting to pour out. What was your inspiration for this character?  (I got a Gael Garcia Bernal meets got a Tom Hanks in You’ve Got Mail vibe… if that even makes sense. LOL)

JESSICA HAWKINS: I absolutely love rom-coms from back in the day, so I wrote this book through that lens, but it was important to me that it had depth, thoroughly developed characters, and diversity. I’m down with a little Latin-flavored Tom Hanks or Zachary Levi. Ha! There are also elements of traditional rom-com heroes—Matthew McConaughey in How to Lose a Guy in 10 Days or Will Smith in Hitch.

JC: The mind of the male is hilarious in this book!!! The staff at Modern Man have the best headlines, jokes and innuendos. How did you learn how to think like a man?

JESSICA HAWKINS: I have to admit, a comedic, raunchy male POV is one of my favorite things to write. I discovered while writing my alpha hero mechanic in The First Taste that I could really let my teenage boy sense of humor rip. I don’t know where it comes from except that I’m a sucker for a good alpha male, and it can be fun to peek into their caveman thoughts.

JC: Georgina’s wit and smarts made her an amazing heroine. For you as a writer, how much research went into how a magazine runs and the steps they needed to take to revamp their image?

JESSICA HAWKINS: I’m a fixer at heart. In all my jobs, I’ve gotten twitchy fingers wanting to make things more efficient, but when you work for a company, there’s always red tape. That’s partly why I run my own business now. Georgina’s role at Modern Man was just me living out my fantasy of coming into a workplace and overhauling it. As far as research, I’ve always been a magazine reader, so it came naturally. That said, I had to go deeper on terminology and researching the pecking order of a publication like that. I’ve been lucky enough to visit Hearst Tower in Midtown NYC, home to magazines like Cosmopolitan and Esquire so that helped me get the vibe of a bustling publication.

JESSICA HAWKINS: Starbucks…unless I’m at the airport or in a train station. For some reason, DD appeals to me when I’m traveling!

JC: You’re a professed coffee shop hopper. Where is your absolute favorite place to write?

JESSICA HAWKINS: Coffee shops work well for me. Writing can be such a lonely career, I love to be out around people as I work…as long as they leave me alone. Ha! I always have my favorite table too, usually somewhere near a window or natural light where I can also see what’s going on around me.

JC: New York City is a gorgeous backdrop for this novel. How does it play a character in and of itself?

JESSICA HAWKINS: NYC is its own character that deserves the stage. I love the city so much, it’s no coincidence I set many of my novels there. Nothing is ever too weird or outrageous for that place. It can be dirty and beautiful in the same moment, and that juxtaposition has always inspired me.

JC: Justin is a fantastic side character who drives this love story! I adored his class-clown attitude and am desperate for him to find love. Any chance he’ll get a book?

JESSICA HAWKINS: I actually wrote Justin a short story in 2017 for an anthology, but so much about the story changed that it doesn’t make much sense anymore. I would love to one day fix it up to release on its own, but first I have other plans to attend to. 😉