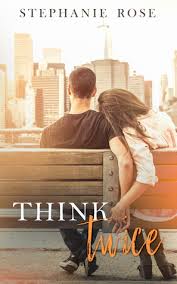 Think Twice is a romance unlike anything I’ve ever read because you get TWO love stories!!! Author Stephanie Rose takes you on a journey with Jack and Danielle, Dylan and PJ through this four-person narrative. Whether you enjoy instant love or forbidden, taboo or unrequited romances, this book will have you thinking twice about reading anything else (See what I did there? LOL!

Both stories have a forbidden element and I really enjoyed this fantastic book about true love and new beginnings. That’s why I’m so excited to have my dear friend, Author Stephanie Rose answer a few questions about this awesome book!

Here is this month’s SPOTLIGHT!

Jeannine Colette: Think Twice tells the story of two separate couples. How did the idea of this double romance come to be?

STEPHANIE ROSE: They started out as two separate stories. Jack and Danielle were originally a short story was called Falling and was featured in an anthology.  Dylan and PJ’s story was a Book+Main serial called Hidden. Both stories were well received and I always intended to go back, but as Jack and PJ are brother and sister–and in my mind, both stories were happening at the same time–I decided to combine them.

JC: Jack Taylor is a NYC firefighter who gets injured on the job. He is rehabilitated in more ways than one by his physical therapist, Danielle. How do these two broken souls help fix each other?

SR: Jack placed a lot of his identity on his job. He was broken and unsure who he was if he wasn’t a firefighter. Danielle pushed him to work hard and get better, even if getting back onto the truck wasn’t guaranteed. As he healed, it highlighted her self-imposed isolation and loneliness. How could Jack want her if she felt so worthless? They both brought each other back to life.

JC:  While Jack is in rehab, his sister PJ is turning eighteen and madly in love with Jack’s best friend, Dylan. When does a relationship crossover from taboo?

SR: I was careful to not have them get together before she turned eighteen. Even though she was of age, because of the family circumstances, they were forbidden enough. Dylan loving her since she was sixteen but keeping a safe distance spoke to his character.

JC: How do the elements of family, friendship and trust impact these romances?

SR: Dylan was basically family to the Garcias. PJ’s father regarded him as a second son and babied his only daughter to the point where she felt he wouldn’t let her grow up. No one would think Dylan reciprocated PJ’s feelings, and when he did, they both knew it would be seen as a betrayal to both her parents and her best friend. I think their relationship shows how the heart wants what it wants when it wants it.

JC: Think Twice is actually a spinoff of another book you wrote. Tell us about that!

SR: All the characters, with the exception of Danielle, are from After You. Dylan and Jack were little boys when Nick met Ellie, and the epilogue from Jack’s POV, showing his rambuctous sister, always made me itch to tell their story. It’s a book about love after loss and the importance of family, and I hope I carried some of that over to Think Twice. (Both are written as standalones, so you don’t have to read one before the other. In fact, I think it’s cool to go back to After You after Think Twice and see the origin of their stories. Kinda like Star Wars :))

JC: Before reading Think Twice I thought reading from four POV’s would give me whiplash but you wrote them seamlessly, I was excited to see who the next chapter featured.

SR: I hoped so, I wanted the book to play out like a movie. My intention was to give the story more depth by showing you all sides. My favorite chapter to write is when Jack finds out about Dylan and PJ. Taking in their relationship through his eyes really brought home how forbidden it really was, and how the family would react to Dylan.

JC:  Are you an instalove or slow burn kinda girl?

SR: Depends. Dylan and PJ are more instalove since the real pining happens before they get onto the page, but I love a good slow burn. The touch of a hand can be mindblowing when a slow burn is done right.

JC: Your love for your hometown is on every page. What is your favorite thing about living in New York City?

SR: I love how different all the boroughs and neighborhoods are. There’s a line in A Bronx Tale where he says you can travel to any borough within an hour, but they may as well be thousands of miles away, and I believe that’s so true. I take my characters to the outer boroughs rather than Manhattan to show how even NYC can have a close-knit, small town feel.